Finding the most cost-efficient battery system

When evaluating and comparing energy storage solutions (ESS), it’s natural to look for the most cost-efficient solution possible. But “cost-efficient” can have different meanings, depending on what specifics you look for and how you prioritize them over each other.

In this first part of the article series, we focus on the aspect of power and performance of your future battery solution.

There’s no one-size-fits-all for a battery solution that will prove to be cost-efficient. Instead, it all depends on the specific circumstances and conditions that set the framework and requirements for the operation you will use the batteries in.

There are several different potential decision criteria to look at when evaluating your different energy storage options. To find the best balance and combination of specs to match your specific operation, you need to know which ones that matter most for your real-life operation. Some of the most common decision criteria would probably be:

The priority order of the above may of course vary and there are typically a few more criteria that can come into play. But for the purpose of this article, let’s focus on criteria # 1, 2 and 4.

Lithium-ion battery technology has found many areas of use in the marine world. Today large energy storage on vessels can both enhance safety and decrease environmental impacts greatly. The high energy density allows lithium-ion batteries in general to occupy a relatively small space on a vessel, while producing high energy levels.

LTO-batteries can hold the same amount of required and usable energy as alternative chemistries, but with a smaller number of installed gross kWh. This means less space needed onboard and, of course, less weight. Consequently: A smaller battery system with LTO-batteries – but one that holds the same usable energy – is cheaper already at purchase, although LTO traditionally has been regarded as an expensive chemistry.

LTO batteries deliver high power instantly and, perhaps most importantly, can be charged very quickly and in frequent cycles. Thanks to a lower resistance level during charging, less heat is being generated and the charging procedure can be done much faster than with other battery chemistries. While not affecting the performance in any way, LTO-batteries can double the charge rates of all the other chemistries which, in turn, can lower the charging times at the dock substantially.

LTO (Lithium Titanium Oxide) shows the best weight to energy output ratio of all commonly used battery chemistries (the other two alternatives are LFP and NMC).

This makes LTO-battery systems ideal for high-power applications in continuous operation – e.g. commuter ferries and other mass transit vehicles that run on a fixed timetable.

The cycle life represents how many charge/discharge cycles a battery can go through before there’s any significant performance drop-off, and is usually (and still) defined by the number of times the battery can be discharged until it can store only 80% of its original energy capacity.

However, this definition of cycle life is a legacy from the old lead acid batteries, which typically experienced a sudden and rapid degradation at this 80% point. Today’s lithium-ion batteries can continue to supply many cycles beyond this point without such an accelerating rate of degradation; some battery types/chemistries, like LTO, can come down as low as to 50% of original energy capacity before they need to be replaced. So, in many cases, the cycle life expressed is an understatement of the actual cycles that will be possible in reality.

The cycle life is related to the Depth of Discharge (DOD), or the percent of the battery’s energy capacity that is utilized during each discharge cycle/usage. The depth of discharge is the percentage of the battery that has been discharged relative to the  battery’s total capacity. Example: Discharging 60 kWh from a battery with a capacity of 80 kWh, the battery’s DOD would be 75%.

As a general assumption and example, decreasing the use of the battery from 80% to 50% DOD can more than double the cycle life of modern lithium-ion batteries. The less you deplete the energy capacity of the battery in each use/charge cycle, the longer the battery’s life span.

The LTO-battery chemistry surpasses other alternatives when it comes to cycle life. It’s estimated that a LTO battery that handles at least 20,000 cycles at 80% DOD can achieve 55,000 cycles or more, at 50% DOD.

Although reducing DOD increases the life of the battery there is one distinct disadvantage: If the DOD is decreased by half, then the energy available is also cut in half.

Consequently, to maintain the same available energy capacity, some oversizing of the battery bank is needed. This is the main reason why it’s common to oversize the battery installation onboard, with maybe up to 2.5 times the calculated need for energy – to “be on the safe side” and not run out of energy supply.

This is not necessary with Echandia’s LTO-battery systems. Lower charging temperatures, faster charging times at higher C-rates*, and an advanced Battery Management System means  the “oversizing-buffer” rarely needs to be more than an additional 20% of the energy required for the given task at hand.

If the required energy is 500 kWh, Echandia would recommend an installation of 600 kWh.

This makes a huge difference between Echandia’s LTO-batteries and alternative systems, not only in weight and space requirements for the battery banks, but also in terms of economic viability; Not only does Echandia’s solution save money over time, but it also presents a 30% lower upfront investment!

* The C-rate is a measure of the rate at which a battery is being charged or discharged.

Contact us in the form below to get a full case study and comparison between alternative battery systems. 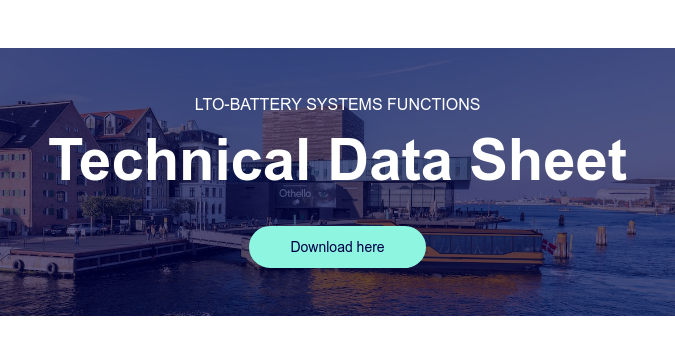 Fit for 55 – a game changer for the maritime industry?