Sparky is on TIME’s list of Best Inventions of 2022

TIME Magazine has revealed its annual list of the year’s Best Inventions with 200 groundbreaking achievements that will in the years to come, go on to change our lives in one way or another.

The list is compiled based on nominations from TIME’s editors and correspondents from around the world, as well as online applications. Special interest was paid to booming areas such as the EV industry, green energy evaluated based on its originality, efficacy, ambition and impact.

We have written previously about our involvement with Sparky, the project initiated by Damen in 2020 – but we feel that nomination needs to noted, and even celebrated.

An invention that can be put in use today

Ship-handling tugs operate under harsh conditions and are set to take on really tough jobs, like pulling container ships many times their size. With that in mind, running on lithium batteries might seem like an exceptionally challenging proposition. However, since August 2022, Sparky – the world’s first all-electric tug – operate New Zealand’s Ports of Auckland on Echandia’s LTO batteries.

The project as a whole, is visionary and bold, especially when it was initiated a number of years ago. The result of all the ingenuity and hard work is showing us that tugboats, already now, no longer need to pollute the often densely populated areas that they serve.

As far as inventions go, as a maritime battery systems supplier – this is what we do daily. Fully electric large scale maritime applications, running on batteries are certainly a novel and innovative concept, but the fact is that we are starting to see it everywhere. 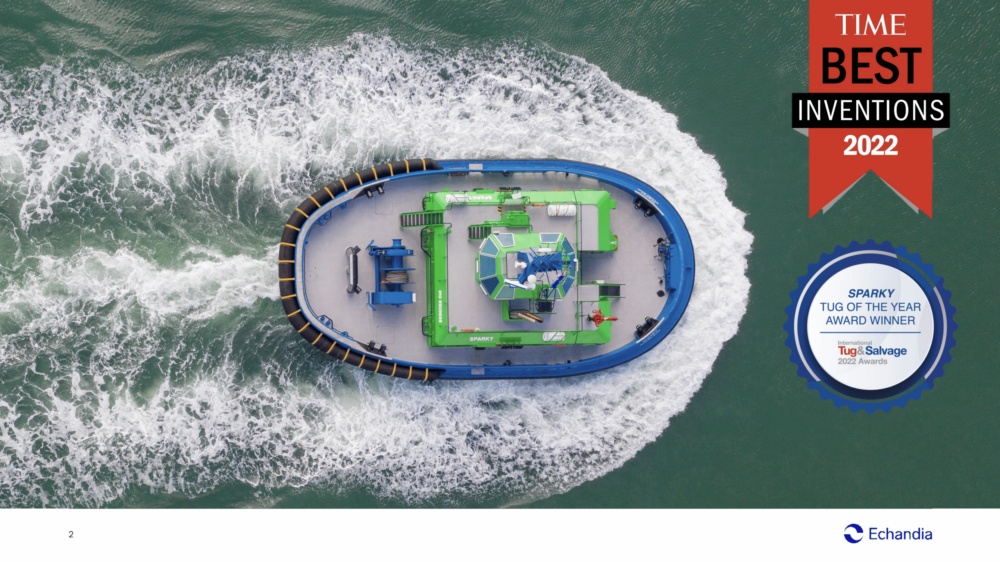 To know more about what makes the tugboat run and how the battery system works, take a look at this post.

Of the project, TIME Magazine wrote:

“World’s Strongest Electric Tugboat – The Ports of Auckland in New Zealand aims to be carbon-neutral by 2040—and Sparky the tugboat will help the organization get there. The world’s first full-size fully-electric tugboat, named by New Zealanders in a public vote and built by Damen Shipyards, the blue and green vessel has 2,240 batteries that together offer 2,784 kilowatts hours of power.

Translation: Sparky can pull up to 70 metric tons, no less than the Ports’ strongest diesel tugboat. But the new tug, which arrived in June, offers a smoother, quieter ride, while preventing 465 tonnes of CO2 emissions annually via diesel exhaust. “Sparky is transformational in setting the tone for an industry that uses a lot of fuel,” says Julie Wagener of the Ports of Auckland.”

Tug of the year – powered by Echandia