Sparky the tugboat is the world’s first fully electric ship-handling tugboat. The official name is RSD-E-Tug 2513 and the electric, battery-powered tugboat is based on Damen’s standard tugboat, called RSD 2513. The abbreviation RSD stands for ’Reversed Stern Drive’.

With its 2,8 MW battery system built for heavy duty, and high-power applications it has an impressive bollard pull of 70 ton, which is comparable to what a conventional diesel-powered tugboat has.

The RSD E-Tug 2513 E is a very easily maneuverable and high-performance tugboat. The flexibility means it can be used in most typical port operations, such as berthing and un-berthing, towing and general port operations.

The 25-meter-long tug, is designed to tow and assist large vessels and maritime objects on inland waters and in ports. It can tow on the winch as well push-pull and pushing operations. It has a gross tonnage of 320 and a marching speed of 12 knots.

The battery installation in Sparky

The basis of the design for Sparky is a battery system containing eight (8) battery systems, divided in two battery rooms. Each system contains 10 strings, and each string contains 28 modules in a series. In total there 2240 modules adding up to 2,8 MWh or 2800 kWh installed. 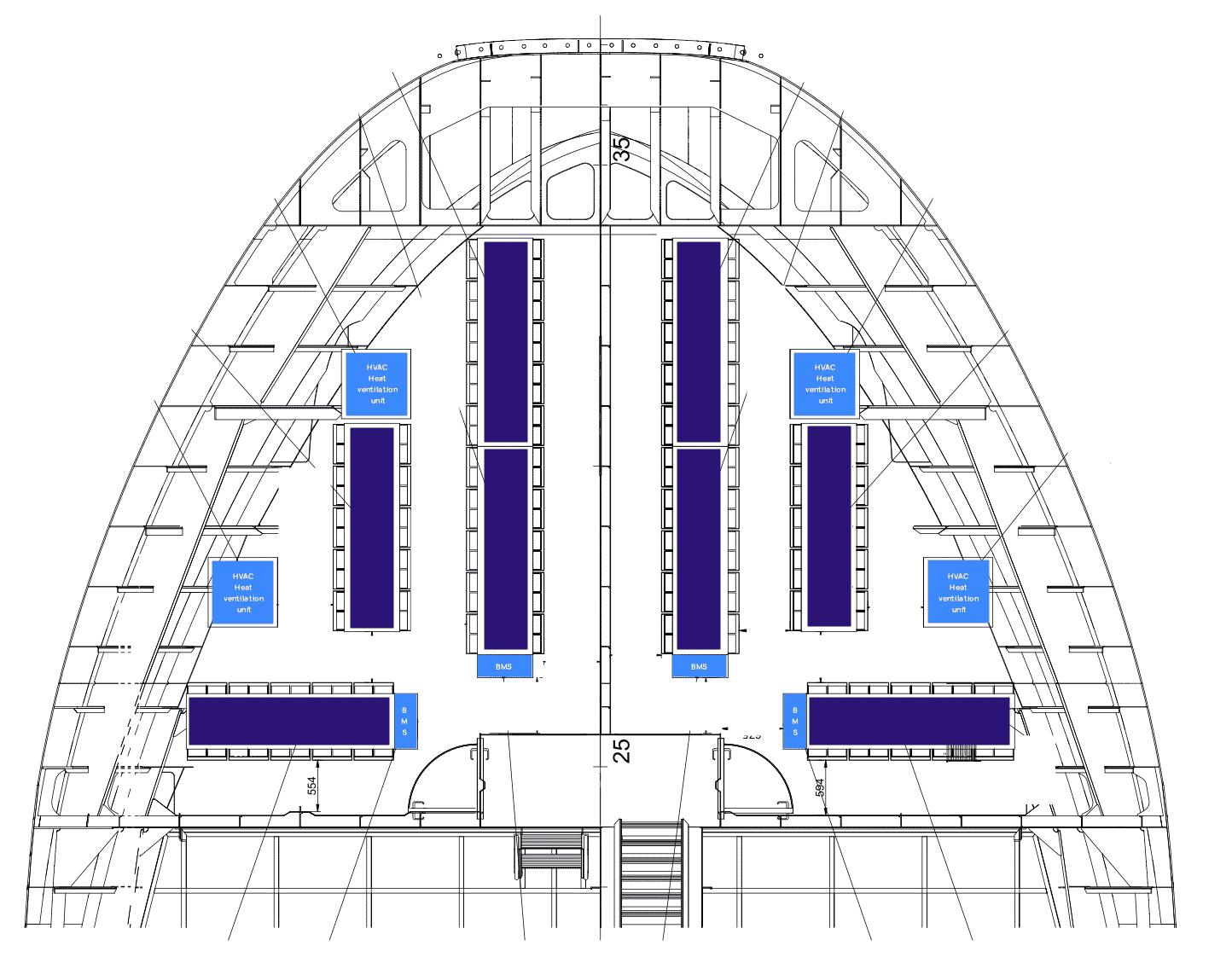 Each string has individual string controllers, and for every system (set of 10 strings) there is a BMS unit, that monitors and controls the batteries. The BMS has four important functions for the overall state of the functionality. Electrical management and safety protection, thermal management, capacity management and diagnostics and data collection.

The battery modules are built into robust aluminium frame racks with dampers to protect against the harsh and rough environment that tugs experience. Molded case circuit breakers capable of disconnecting at full short circuit current and integrated ventilation provide sufficient airflow around the battery modules to keep them cool.

There is also an external cooling system will cool the air in the battery room with the goal to keep the air-temperature near the battery rack air inlet at approximately 22°C.

What type of battery is suitable on a tugboat?

The battery used on Sparky the Tugboat is Echandia Power LTO. Echandia Power is a battery based on the LTO chemistry which is extremely well suited for tugboats and workboats because of its unique characteristics.

A tugboat needs a lot of peak power to perform its towing and pulling-duties in harsh conditions. One of the key benefits of Echandia LTO is the high C-rate capabilities (i.e., high peak power). It will easily deliver continuous peak power of 10 MW.

In real life situations Sparky is operational for 2-3 hours before needing to recharge. Which it will do around three times per day and will safely be operational for 25.000 cycles. With three charging-discharging cycles per day it would give it life span of over 20 years. Add to that, its safety features that makes it a very reliable and trusted source power.

LTO batteries are also very compact in size and have considerably smaller footprint than competing systems.

How to dimension batteries for tugboats?

Tugboats and workboats have varying operational profiles. It doesn’t run on any regular routes or schedules it is a bit trickier to dimension its battery system. Tugboats are used occasionally as a service function for large ships entering port areas. Typically, a tugboat has 1-5 operational assignments per day, but it all depends.

Given these special circumstances, it is best to look at historical data of how tugs have operated previously when dimensioning the batteries. That way we can see what kind of energy is required over a long enough time-period.

A simple start is to analyze jobs done/day, total operational hours/day and rest periods in a sequence of dates.

Another important data point is to evaluate load requirements, which also can be done by looking at usage data from a conventional tug operating in the same . The data needed is duration for a specific task, load factor (%) and when you summarize propulsion energy and hotel load needed, you get the total energy requirement.

With a tugboat, the need to sometimes go beyond the planned profile is necessary and needed flexibility, however, designing, and dimensioning batteries for any potential use case is not feasible. That’s why it’s common procedure to use one or two additional, smaller diesel generators as back-up or as additional power. That way the battery doesn’t need to accommodate for 100 percent of the potential use cases. This provides flexibility and operational freedom, while being emission free for of around 80 to 90 percent of the time.

Sparky is now in use for daily operations in the Port of Auckland which is one of the world’s busiest ports. With increasing regulatory pressures, especially with restrictions of port Co2 emissions, electrified tugboats are a key initiative to reduce these harmful emissions. If you are a naval architect, operator, or shipyard about to design or build tugboats, contact us to better understand how to get started with full electric propulsion.