How does Fit for 55 affect the maritime industry?

The European Union (EU) has set a binding target to achieve climate neutrality by 2050. Already by 2030, GHG (greenhouse gases) will be cut by at least 55%, hence the name – Fit for 55. The package is a combination of several initiatives that will have massive effects on the maritime sector.

We first wrote about Fit for 55 after its release this summer. The impact of these measures is becoming clearer, as some time has passed since the package was first released in July 2021.

Here is a rundown of the most important pieces of the package, and what it will mean for the maritime sector.

What is the European Union’s Fit for 55?

Almost all shipping today is powered by fossil fuels, but until now, the maritime sector has surprisingly not been included in any attempts to reduce greenhouse gas emissions. In July 2021, the European Commission presented the so-called Fit for 55 package. It works long-term towards the goal of zero emissions 2050 and includes reducing the EU net emissions by at least 55% (compared to 1990 levels) to the climate target set for 2030.

Fit for 55 is a package consisting of two revised EU directives and two new regulations. These are:

At the present, these are proposals to be decided by EU Member states, EU Parliament and EU Council during 2022. Negotiations are ongoing and the final text, and consequently the impact are still somewhat unclear.

Carbon dioxide emissions in shipping shall be reduced, and this will be achieved by introducing a limit on the greenhouse gases (GHG) emitted by ships. There will also be a demand to pay for shipping emissions in the emissions trading system (ETS). From 2023 there are new demands to buy allowances for 20% of shipping emissions. It will be increased gradually, with a complete phasing of 100% in 2026. The cost of one EUA (EU Allowance) for one tonne of carbon dioxide, CO2 has gone from around $60 to hovering around $90 in February of 2022.

The goal of including shipping into the trading system is to incentivize improvements in energy efficiency and low carbon uptake solutions, which aims to reduces the price difference between alternative new green fuels and traditional fossil fuels.

This directive is being revised to remove the tax exemption that has been in place for conventional fuels. From 2023, heavy fuel oil will be included in the updated Energy Taxation Directive (ETD), with a minimum tax starting at 0.97 EUR/GJ or approximately EUR 37 per tonne of fuel. Increasing to EUR 1,11 per GJ in 2033. 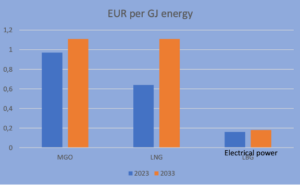 The FuelEu is a new regulation for shipping, that is expected to enter into force on the 1st of January 2025. The FuelEU regulation is imposing life cycle GHG footprint requirements on the energy consumption on board ships. It means that shipping companies must limit the GHG intensity of the fuels they use by a certain percent, starting at 2% in 2025. That will also be introduced gradually and will reach 75% from 2050. 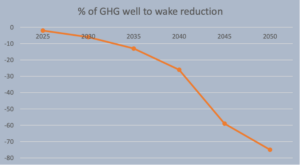 The intention of course, is to drive shipping companies and fuel producers to an uptake and production of low carbon fuels.

The FuelEU regulation requires monitoring and reporting over the entire fuel life-cycle, i.e. taking on a well-to-wake perspective. Well-to-Wake or life-cycle-emissions, means understanding the sum of GHG intensity from fuel production to fuel consumption to operate the vessel.

Battery-electric and hydrogen are two of the most common zero-tailpipe-emissions fuels considered when taking a tank- to-wake approach.

This regulation is an update of an existing directive and will require EU member states to ramp up the availability of LNG by 2025 in EU Core ports as well as onshore electrical power supply by 2030. Adhering to this is not responsibility of the ship owner, rather it is EU ports and is therefore

The impact of the measures laid out by the EU (as well as by the IMO) is gradually being increased and will increase in intensity over the coming years. What is already clear is that larger ships (over 5000 GT) will quickly have to decarbonize their port calls to become zero-emission, meaning that vessels won’t produce any emissions when entering and staying ports.

At Echandia we regularly discuss the impact regulatory frameworks will have on owners and operators. We can support you team with analysis of what impact these measures will mean in the context of your operation. Please contact us here to set up a meeting, workshop or conference-call.

Our CEO Magnus Eriksson recently visited the podcast Insider’s guide to energy, discussing the electrification of the marine industry. Might be worth a listen if you interested in knowing more.