Key takeaways from the WATTS-UP Conference 2022, in Stavanger 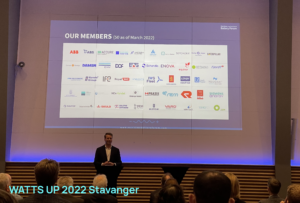 Based on data from Maritime Battery Forum and DNV, the current state of maritime electrification was illustrated by looking at the development for the last ten years, compared to today. Ten years ago, 2012 there were 30 battery powered vessels in operation, globally. Today, ten years later this number has grown to over 400 vessels.

If you extrapolate this development linearly, there will be over 5000 electric vessels in 2032. However, most attendees suggested that development won’t be linear, and that the actually could be much higher.

Outside of this remarkable trend, there were three key insights from the conference that we thought we’d share with you.

1. Dominating technologies will continue to dominate

It’s clear that, despite all the hype of new battery chemistries, the industry still relies on the three major technologies, NMC, LFP and LTO. Each one with different capabilities to meet varying operational profiles. Within the realm of these three, there will of course be development and improvements. However, these will, for the foreseeable future continue to be the relevant and commercially available technologies.

Technologies as saviors, as the promise of ‘solid state’ has been for years, is still considered far off as highlighted by Torleif Lian from the Norwegian Defense Research Establishment.

As far as implementing newer cell technology on the market,  maritime is behind the automotive industry. Undoubtedly, they have come further in its electrification journey. 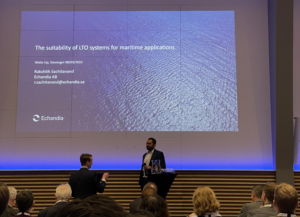 In the segment of battery technology Rakshith Sachitanand from Echandia gave a speech on the suitability of LTO for maritime applications which highlighted some of the key qualities of LTO. If you want this presentation, contact us here for more info.

2. Markets outside of Norway is picking up speed

The second key insight is that – even though Norway is spearheading the development, other markets is catching up. In Europe, we are sometimes unaware of the speed of development overseas. To fill this knowledge gap, Eileen Tausch from Spear Power Systems gave an interesting insight to the American maritime market and the state of maritime electrification. The demand is exploding, with at least 85MWh of projects in execution in the US right now. A lot of this demand is driven by the Biden initiative on infrastructure and climate action plan. 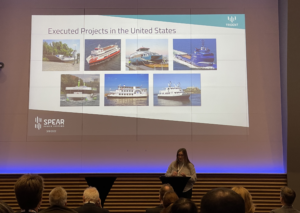 However, the Buy American Act and other similar local trade barriers can make it more difficult for vendors outside of the US to compete. This comes into play when the owner or operator receives government funding for their project, which given the situation would be rather common going forward.

According to Eileen, system integrators still have a lot of influence in tenders, due to the fact that they still have deeper technical knowledge. Many shipyards and operators are still uncertain and might lack competence on how to approach and implement battery systems. This will most likely change. With time, and projects completed they’ll get more comfortable with battery technology.

Digitalization and data connectivity is coming to maritime battery market. Many of the topics and presentations during the conference pointed in this direction. There’s no shortage of data, but historically the industry has not had a lot of focus on the possibilities here. The fact is that massive amounts of operational data is generated as soon as the battery is in place and it’s quickly becoming an important and key asset. The challenge is to find the best way to gather, analyze and utilize this data.

Using data the right way will lead to improved reliability in the systems as well as potentially better performance of the batteries. For battery suppliers it will open up insights to become more accurate in battery size dimensioning, which consequently will lead to smaller, cheaper installations.

In conclusion – all ships will have battery systems onboard

The list of insights could be longer but of all the things discussed during these two days, these stuck out. If there’s one more thing that could be added it’s the development in shore power infrastructure, as well as off-shore-charging technologies, that Sebastian Toft from Stillstrom (a Maersk venture company) presented.

As with all technical developments, there are uncertainties – but one thing is for sure. All vessels, in one shape of form will utilize battery technology.