Peak shaving and other ways to use batteries on a vessel

Energy efficiency and reducing fuel consumption has become one of the most important questions as operators and shipowners scramble to meet increasing demands from regulatory frameworks. For larger, ocean-going vessels there are several functions that batteries can perform, that will reduce fuel consumption and increase energy efficiency. Typically, they are used for peak shaving, as spinning reserve, for energy harvesting and as backup power (UPS) detailed below.

Many shipowners have already started to adapt and rebuild their fleets to abate the costs that non-action entails. Many of them are looking at solutions to be zero-emission when entering ports, or for maneuvering and positioning, as well as creating efficiency in existing engines.

The regulatory bodies have different goals, with differing ambitions. Already in 2023, the ETD and ETS will come in to play, with regulatory impact increasing until the first major milestone in 2030. At this milestone EU has set the target to meet a 55% CO2-reduction. We have elaborated more on the regulatory frameworks in this post.

How to use batteries on a vessel?

To meet these requirements a plethora of methods and technologies will have to be used, where the most impactful is intuitively on the energy and fuel consumption side. This is where in the best-case scenario of full electrification with batteries can achieve a 100 percent well-to-wake reduction in CO2-emissions. 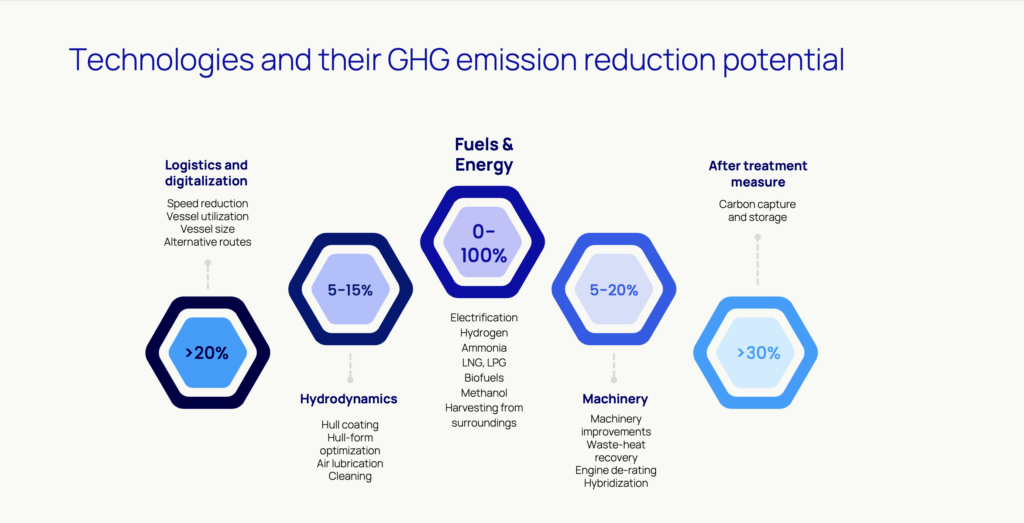 For many larger vessels however, full electric propulsion is not a viable solution. But there are other ways that batteries can supply energy and fill multiple roles to increase energy efficiency and fuel reduction.

What it is you can do with batteries when it comes to hybridization? The most common ways to get substantial fuel reduction on a larger vessel is:

Most large vessel have multiple generators that are running onboard to ensure redundancy if one goes down. However, running multiple generators is disadvantageous from an efficiency perspective. Essentially, a spinning reserve lets you run on fewer generators while maintaining a steady capacity utilization, and let batteries pick up extra load, and provide backup if anything goes down. This will optimize the overall system, since generators running at their rated capacity will reduce the fuel consumption. Spinning reserve is used as backup for generators onboard and keep the vessel in operation at all times.

Similarly, battery systems can also be used to shave operating peaks to increase efficiency by providing immediate power. As engines generally function most efficiently when they operate at a constant level, there is a great advantage to reduce peaks and lows in load.  Batteries on the other hand, have no problem to very rapidly shifting and deliver peak loads.

Energy harvesting is utilizing the battery to act as an energy recovery unit. For instance, in operations on board, a crane consumes a lot of power when it’s lifting, but it also releases a large amount of energy when it’s lowering. You can couple the operation of the crane to a battery and essentially recover the energy to be harvested in the battery and reused in operations.

Similar to load optimizing and as a source of immediate power, batteries can of course be used as backup power. In a maritime setting, providing stability and quick access to emergency power is crucial. In this setting a battery would provide the required energy to eliminate the occurrence of a blackout.

What can be saved?

Spinning reserve, peak shaving, energy harvesting, and backup power are the four most distinct applications for battery systems to be used onboard vessels. But what can be expected in terms of savings and increased efficiency with these applications?

Of course, it’s different for different kinds of vessels because the role that batteries perform are different on different vessels.

For example, on a vessel using peak shaving you can save anywhere between 5 and 20 percent of fuel with the battery system and the payback periods are typically between two and five years.

These numbers are dynamic, and at this point based on a substantially lower cost of carbon. The increase in cost of carbon offsetting has not been factored in. When you add the cost of emitting carbon the return on investment might get even quicker than this.

On the 18th of March, we held a webinar where we presented a more in-depth analysis of the topic of energy efficiency, and how batteries can be used on a vessel. To see the full webinar or download the presentation use the links below.

Key takeaways from the WATTS-UP Conference 2022, in Stavanger