We are winner of Ship of the Year 2021. As we previously mentioned, one of our projects together with Damen Shipyards, was nominated, Ship of The Year by KNVTS in the Netherlands, On November 1st The fully electric Bryggen Ferries was awarded the prestigious prize during the Maritime Awards Gala.

SWZ Maritime Magazine commented on the prize by saying:

”The ferry Bryggen has won the KNVTS Ship of the Year Award 2021 for its innovative, fully electric and environmentally friendly design that is also efficient in operation and economically competitive.

And, also worth noting in the article:

To meet the design criterion “fully emission-free propulsion”, electrical propulsion was chosen, using batteries as the energy source. No generators have been installed. The choice of batteries is based on the length of the route and the availability of three battery charging stations. ”Due to the choice of batteries, the total battery capacity is fairly small, which saves weight and space. ”

Our CEO, Magnus Eriksson was present at the award to receive the prize together with other participants in the project. 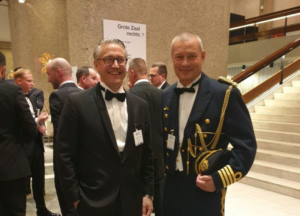 “We like to think that the energy storage solution from Echandia was a big part of the reasoning why Bryggen got the award. We are proud to have been a part of this project, and the prize itself is an important recognition for electrical passenger ferries. Hopefully, this will lead the way for future projects and innovation in this area”, says Magnus Eriksson, in a comment.

A short video to display the features of the project.

The Bryggen Ferries project was the first fleet of fully electric passenger vessels in operation and was an impressive and important milestone for maritime electrification when it launched in 2019.

The fleet consists of seven electric vessels operating the waterways of the Danish capital, Copenhagen. The world leading public transport company Arriva is the operator.

The jury selected the nominees based on criteria of design, economy, sustainability and environment, safety and construction process.

All seven ferries are completely emission free, and the choice of electric propulsion and energy system was chosen with the demanding operating profile in mind.

The ferries are in operation 17 hours per day, 365 days a year. Every trip takes about an hour, and the ferries are fully charged in under ten minutes 17 times a day. This is an automatic process with a mooring system that establishes a secure connection between the ship and charging station on shore.

Sparky is on TIME’s list of Best Inventions of 2022

Tug of the year – powered by Echandia